ACS and Ed Force One On Tour

Over the last four months legendary rock band, Iron Maiden, has been flying around the world on their The Book of Souls tour on the coolest ‘tour bus’ ever.https://aircharterservice-globalcontent-live.cphostaccess.com/images/news-images/ef1_table_mountain20resized_tcm36-36777.jpg 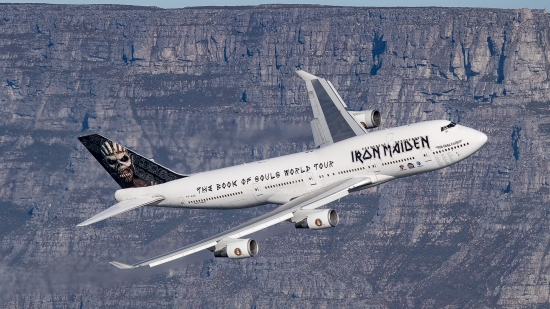 Over the last four months legendary rock band, Iron Maiden, has been flying around the world on their The Book of Souls tour on what is probably the coolest ‘tour bus’ ever – a customised Jumbo Jet, captained by their lead singer, Bruce Dickinson. The B747 completed its final leg after landing in Gothenburg on the 16th June.

Towards the end of last year Air Charter Service received the interesting charter request: the client required a customised B747-400 for four months, to fly 48 sectors, covering six continents and carrying 22 tonnes of cargo on each leg and with Iron Maiden’s singer flying it. The request was the first step towards creating the latest incarnation of Iron Maiden’s Ed Force One – nicknamed after the band’s mascot ‘Eddie’, whose manic image proudly adorns the tail.

Iron Maiden had experience and expertise with circumnavigation tours on the previous incarnations of Ed Force One, but these tours used a smaller B757 aircraft and were nowhere near the scale and reach of this latest project. Through Bruce Dickinson’s relationships within the aviation industry, Iron Maiden had already picked out the ideal aircraft, but the operator, Air Atlanta, decided they needed more capacity to deliver such a massively complex undertaking. So they invited Air Charter Service to join them to deal with mountain of logistics required.

This tour presented particular challenges for all involved. After closely engaging with the band’s management team, the first thing ACS did was to assemble an experienced team to work with the aircraft’s operator, Air Atlanta, to make the thousands of necessary arrangements for the 48 legs in the 21 countries that the tour was visiting. ACS was responsible for arranging flight permissions and fuel as well as handling agents. Arranging such things on an ad-hoc basis is very different to a scheduled carrier who lands at the same airport at the same time every day. And at most airports, ACS had to deal with three separate companies – the cargo handlers for the 22 tonnes of stage equipment, VIP handling agents for the band and their ‘Killer Krew’, as well as regular check-in desks for anyone else that was on board. Group Commercial Director, Matt Purton, said: “We must have dealt with more than 100 different handling agents and 300 other suppliers over the course of the four months that we were involved in the tour.”

Whilst ACS was making the initial necessary arrangements, preparation of the aircraft was under way in Sharjah, UAE. Iron Maiden’s management had arranged for the aircraft to have its livery drastically modified with extra special decals along the length of the fuselage and the tail and the cabin seating was reconfigured to accommodate the band. The newly created Ed Force One then arrived at Cardiff Airport on February 17th. On arrival the aircraft interior was completely empty of supplies, so the next major job for ACS staff was a three day shopping expedition to stock the aircraft up with almost ten tonnes of day-to-day items to cover the needs of the passengers for the next four months.

Purton added: “No challenge was too big, or too small for our team – whether it was decanting liquids and unpacking sandwiches to get them through security, gaining emergency access to the aircraft to collect the band’s football kit or arranging the logistics of an Air to Air photoshoot over Table Mountain, one of our team was always on hand.”

The band’s aviation-mad frontman, Bruce Dickinson, took up flying in 1993 and so was keen to take the controls on most of the flight sectors. He was formerly captain of the (now defunct) UK charter airline Astraeus and launched Cardiff Aviation Ltd in 2012. Purton commented: “Bruce loves showing off the aircraft at every opportunity – including giving a guided tour to the crew of Air Force One when the two aircraft were both in Chicago at the same time. He also flew it to Boeing HQ at Paine Field to help them celebrate the manufacturer’s 100th Anniversary and to take a lucky few on a tour. His interest shows no bounds, our departure in Perth, Australia, was delayed by half an hour as he was being shown around the largest aircraft in the world, the Antonov AN-225 and he’d often come straight off stage and the first thing he’d ask would be ‘what’s the fuel uplift tomorrow?’”

It was not all plane sailing though, as in Santiago di Chile, when the plane had been closed up and everyone had settled in to their hotels for the night, airport workers moving the aircraft were involved in an incident involving a loose steering pin and an airport tug, which saw damage occur to two engines and the undercarriage as well as injury to two workers present as the tug was crushed. Suddenly Ed Force One was grounded but of course the show must go on, one way or another. Within hours, Iron Maiden’s management, Air Atlanta, Rock-It Cargo and ACS all pulled together to make the necessary arrangements including alternative charters to take the band to the next show in Argentina, a charter and some scheduled seats were found for Iron Maiden’s ‘Killer Krew’ and the 20 plus tons of stage equipment and production was trucked successfully over a difficult pass through the Andes Mountains over the border into Cordoba. Alternative transport had to be rapidly arranged for the Argentine and Brazilian shows. Two massive new engines, engineers, parts, cowlings and tools were flown in from Europe, and within 10 days, Ed Force One was once again ready to take to the skies. And we were all very happy to hear that the two airport workers made a full recovery.

To take a band, road crew and production equipment in a B747 around the world and into territories not previously visited by the band was ground-breaking: nothing like this had ever been attempted by anybody before. ACS worked seamlessly with Iron Maiden's Tour Management throughout, in order to meet the exacting needs of the tour logistics, concert schedule and the band and crew requirements.

And so, after 50 shows on six continents, ACS’s involvement in the tour comes to an end and we bid a fond farewell to the latest incarnation of Ed Force One. Purton concluded: “This is one of the most complicated world tours ever, and it ran pretty smoothly – apart from the incident in Chile. We’d like to thank Iron Maiden, Air Atlanta and all our other partners involved in the tour and feel privileged to have been part of a great team making sure over a million fans got to see their idols play live.”

Bruce and the rest of Iron Maiden continue to tour Europe, finishing up in Germany on 4th August.